Energy Conservation isn’t always about turning off the lights. Water conservation can also play an important role in cutting back utility usage on campus, a fact that is appropriately reflected in the University’s Energy and Water Conservation Policy. There are initiatives in the works for increasing water conservation efforts at the University of Saskatchewan, but possibly its most successful endeavour as of yet has been the recent retrofits conducted at the Education Building.

In September 2012, the Education Building was selected as a pilot site for a number of water fixture retrofits. One major change was seen in replacing 63 toilets with dual flush, low-flow models; toilets changed from using 22 litres of water per flush to 4 -6 litres per flush, reducing water usage in bathrooms to nearly a quarter of the amount used by the previous fixtures. A second change, suggested and implemented by Gord Poole with Facilities Management, saw the installation of sensor systems on urinal groups throughout the building. Before this change, the urinals would drain a three-gallon tank every 5 – 20 minutes all day, every day. By requiring that the sensors be activated for at least 6 seconds before the urinal would flush, the change was able to save an enormous amount of wasted water.

To determine the success of this pilot project, metering technology was installed in the building that allowed Facilities to measure water consumption every 15 minutes. As of February 2015 the retrofits have saved 41 million litres of water in the Education Building and are in line to meet their 3-year payback period. Further estimates by the Office of Sustainability show that if these upgrades were made across campus, the University could see savings of 200 million litres of water and about $400,000 per year. 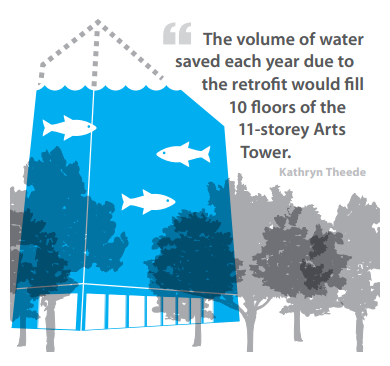 The University is committed to identifying new opportunities to embrace sustainability wherever it can, and case studies like this make implementing these solutions much easier. With the successful development of the University’s Campus Sustainability Revolving Fund to help pay for upgrades and the technology to document the successes, these sorts of initiatives can become even more commonplace in the future.

The Art(s) of Water Conservation

Bright Lights Shining on Physical Education at the University of Saskatchewan